US investigators have confirmed that the left-hand main landing-gear of a Red Air Boeing MD-82 collapsed just after touchdown at Miami, before the aircraft suffered a runway excursion.

It had been arriving from Santo Domingo on 21 June, and the ILS approach to runway 09 had been normal, the crew told the National Transportation Safety Board.

Weather conditions at the time of the accident were good.

According to preliminary NTSB findings, the first officer – who was the flying pilot – said the landing was “smooth” with the touchdown taking place first on the right-hand main gear and then the left, slightly right of the centreline.

“The crew felt an increasing vibration on the left side of the airplane shortly after the left main-gear touched down,” says the inquiry.

“During the landing roll-out the left main gear collapsed, the airplane travelled to the left where it eventually departed the paved surface,” it adds. 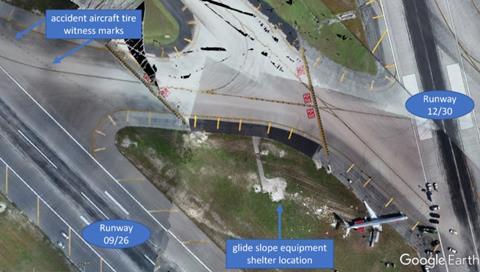 The aircraft collided with the glideslope equipment shelter for the adjacent runway 30 and came to rest in a grassy area between the two runways.

As a result of the excursion, the MD-82’s right-hand main gear and nose-wheel collapsed and the fuel tanks ruptured, generating a fire in the right wing.

All 130 passengers and 10 crew members evacuated with four passengers suffering minor injuries. The fire was extinguished by emergency response personnel.

Flight-data and cockpit-voice recorder information has been downloaded at the investigators’ Washington facilities and the pilots, cabin crew and emergency responders interviewed. 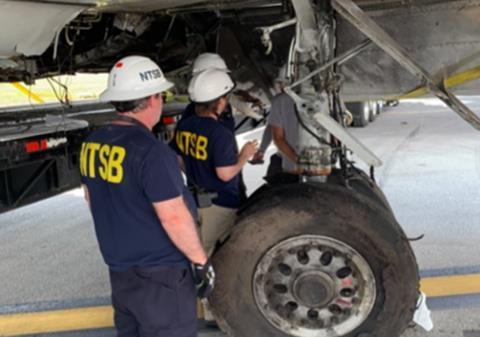 Runway debris and marks have been documented using techniques including unmanned aerial vehicle surveying, while searches were carried out in the grassy areas near runway 09 for landing-gear components.

Cirium fleets data shows the aircraft (HI1064) was originally delivered to American Airlines in 1990, and later served with Venezuelan operator Laser Airlines, before being transferred to Red Air last year.