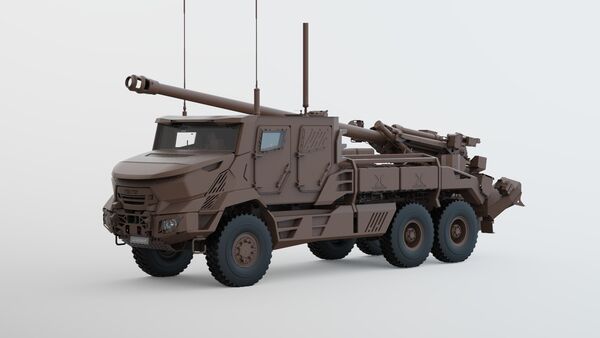 Lithuanian Defence Minister Arvydas Anušauskas signed a letter of intent with his French counterpart for the purchase of 18 CAESAR Mk II self-propelled howitzer (SPH) systems at Eurosatory 2022 in Paris.

These will equip the artillery battalion of the ‘General Motiejus Pečiulionis’ brigade, which currently operates M101 105 mm towed howitzers. Deliveries of the CAESAR Mk II to Lithuania are expected to take place in 2027. This marks the third customer for the system, after the French Direction générale de l’armement (DGA) contracted Nexter to develop the Mk II version in February 2022. France could acquire up to 109 new build 6×6 CAESAR Mk II SPHs by 2031. In May 2022, Belgium signed a contract of nine such systems.

On 16 June 2022, Reuters reported that ahead of his visit to Kyiv French President Emmanuel Macron asked Nexter to increase the CAESAR production rate. During his trip, President Macron announced that a further six 6×6 CAESAR SPH’s would be donated to Ukraine, bringing the total to 18. The current production rate of the CAESAR is understood to be at 10 systems per year.

The universe is surprisingly lopsided and we don’t know why