The Doha-based carrier will install the system on its entire fleet of 777X aircraft. 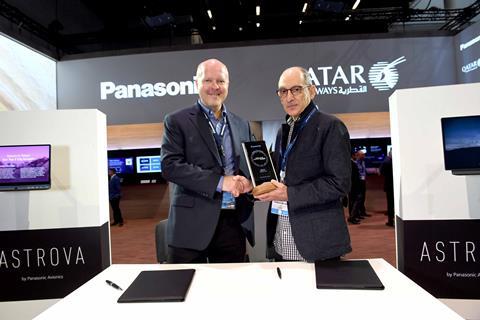 Qatar Airways chief executive Akbar Al Baker tells FlightGlobal that the airline chose Panasonic’s Astrova product because it has “functions that no other IFE provider has invented”.

The Gulf carrier has orders for 40 777X passenger jets and will also be the launch customer for the 777X freighter. Boeing had intended to begin delivering the 777X in 2023 but has been forced by certification delays and supply chain issues to postpone this until 2025.

Al Baker says that while he is “not happy” with the delays to the aircraft programme, he has “confidence” in Boeing.

Panasonic unveiled Astrova at the show today, describing it as a “seat-end” IFE system that will “redefine the role of seatback IFE”. It features “cinema-grade” 4K OLED high dynamic range (HDR) screens which, at 7mm thick, are described by Panasonic Avionics chief executive Ken Sain as being “the thinnest on the market by far”.

It is available in four screen sizes, ranging from 13in to 22in, and is available for installation on widebody, narrowbody and regional aircraft.

Astrova provides 67W of USB-C power to each seat to allow passengers to charge their own devices, enabling “90% of laptops to fast charge on the aeroplane”, says Panasonic Avionics vice-president product and portfolio management Andy Masson.

The system is connected to the IFE provider’s in-flight connectivity service, meaning that passengers can connect their own devices to the seat-back screen and access their personal content subscription services such as Netflix, Apple Music, Spotify and Disney+. This enables passengers to recreate the “multi-screen, multi-purpose environment which they are accustomed to at home”, says Panasonic.

Whereas traditional embedded IFE systems are “difficult to upgrade” once they have been installed, Masson says Astrova’s “revolutionary software” means that airlines can easily upgrade the system as their requirements evolve, instead of having to “rip it out” – which he says was previously a “long-term pain point” for IFE systems.

Panasonic is also keen to emphasise the weight savings offered by Astrova. Masson says the system is 30% lighter than competing IFE products, which “represents huge savings in fuel and CO2” for airlines.

Each screen features a removable peripheral bar underneath, which can be “upgraded and changed in two minutes”, says Masson. The peripheral bar is where devices can be plugged in, including headphones, and “spatial 3D audio makes it like having surround sound in your seat”. Low-cost headphones handed out by airlines “feel like world-class headphones” once they are connected, Masson claims.

Panasonic expects Astrova to be certified in time for first deliveries to begin in late 2024, with the system scheduled to launch with Qatar Airways in 2025. In addition to Qatar, Masson says that Panasonic has signed up “multiple” other unnamed airline customers for the system.

‘Obi-Wan Kenobi’ episode 4: A daring rescue that doesn’t quite hit the mark