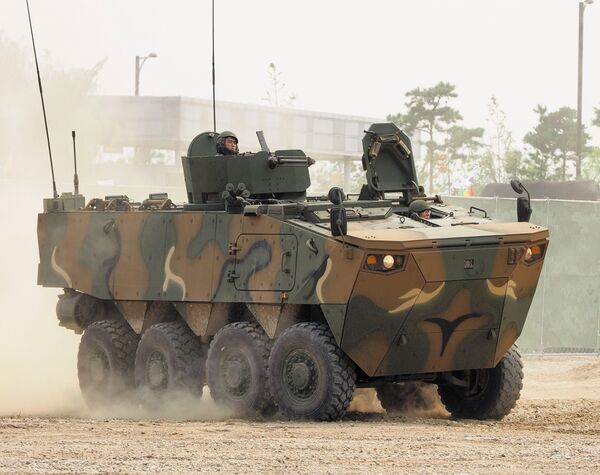 Hyundai Rotem has secured a contract to start building command post vehicles for the South Korean military. The new platform is based on the company’s K808 wheeled armoured vehicle (pictured above), which is operated by the Republic of Korea Army. (Janes/Kelvin Wong)

DAPA said on 1 June that the contract – worth KRW55.3 billion (USD44.7 million) – enables Hyundai Rotem to start mass-producing the CPVs, with deliveries to battalion and higher-level units within the Republic of Korea Army (RoKA) and Republic of Korea Marine Corps (RoKMC) to start from 2023.

DAPA said the project to develop the CPVs, the design for which is based on the company’s 20-tonne K808 wheeled armoured vehicle (WAV), started in 2017 and ended in December 2020. It said the total CPV programme will be worth KRW1.5 trillion, indicating additional future procurements.

The agency added that the vehicle is intended for replacing “tent-type field command posts that take too long to install and dismantle, and cannot protect against enemy firearms, artillery, and chemical threats”.

Safran to Develop New Landing Gear for Next Generation Milit

IAI Signs Contract to Provide Special Mission Aircraft to a