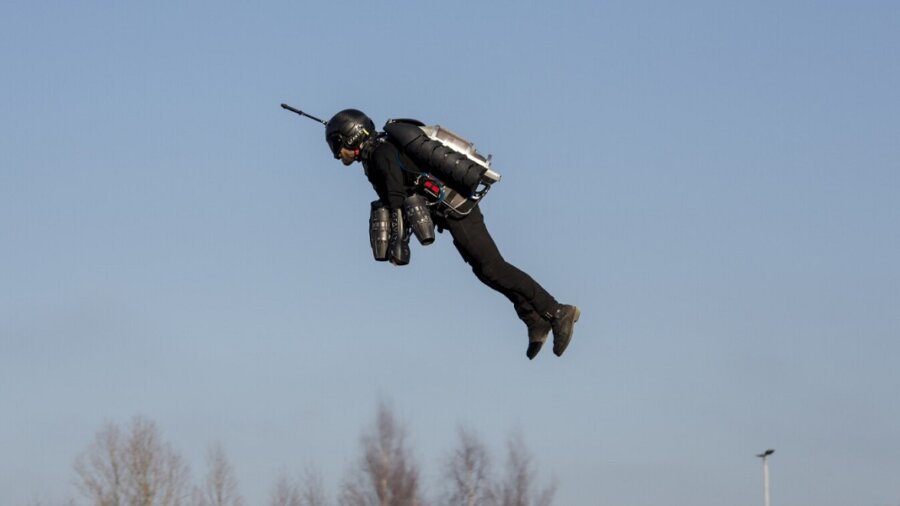 In 2020 a jet suit pilot flew up a mountain to test whether it would make sense for emergency responders in wilderness areas to add jet suits to their toolkit. Last year the same suit was used by the British Royal Marines to board a ship in a staged “visit, board, search, and seizure” (military speak for getting on a ship whose captain or crew don’t want you there, like trying to capture an enemy ship or intercept terrorists or pirates). Most recently, a trial combining military and search-and-rescue missions used the jet suit as part of a NATO Mountain Warfare Rescue simulation.

In the Slovenian mountains a pilot strapped on the jet suit made by Gravity Industries, glided smoothly and rapidly uphill along a hiking path, and delivered blood plasma to a waiting group. The group included medics and an “injured” soldier who had been rescued from a deep gorge next to the trail.

The jet suit is powered by five gas turbine engines that together generate 318 pounds of thrust. A pilot can travel up to three miles on a single fuel-up, reaching speeds up to 50 miles per hour. The suit’s creator and Gravity Industries’ founder is Richard Browning, a former Royal Marine. After setting a Guinness World Record for the fastest speed flown in a body-controlled jet engine-powered suit in 2019, Browning started looking for practical and humanitarian applications for his invention.

In rescue situations like the NATO exercise, a jet suit pilot wouldn’t be replacing emergency personnel, but rather trying to reach an injured person as fast as possible. It’s also a quick way to deliver medical supplies or equipment, though whatever’s being delivered would have to be pretty light so as not to slow the engines’ thrust down too much.

Admittedly, integrating jet suits into teams of medics and first responders wouldn’t be the easiest thing. The suits are expensive, for starters—$400,000 as of last year. Browning claims it’s relatively easy to learn to operate a suit. “It’s a bit like riding a bicycle or skiing or one of those things where it’s just about you thinking about where you want to go and your body intuitively going there,” he said, adding, “We’ve had people learn to do this in four or five goes—with each go just lasting around 90 seconds.” It’s likely there would be a learning curve nonetheless (and it could be either really fun or sort of dangerous, depending on the learner and the setting).

Meanwhile, Gravity Industries is coming up with other uses for its product, like having a pilot race a Porsche Taycan through an uphill obstacle course. This can’t exactly be called practical or humanitarian, but it’s definitely entertaining. Would-be pilots curious to experience jet suit flight can register for Flight Experience or Flight Training packages, or can even commission their own jet suits.

It may be a while before we see widespread use of these things, but it doesn’t seem like a bad idea for emergency rescue teams to have a jet suit or two on hand.